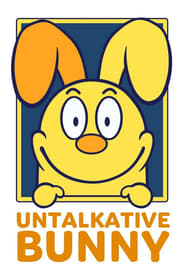 Untalkative Bunny is a Canadian/British co-produced animated series about a yellow rabbit and its life in the big city The series consists of small episodes, and are aired by Teletoon, as well as Disney in many parts of the world including the UK & France. It no longer airs on Teletoon, having been cancelled after June 2005. The episodes usually deal with Bunny and the problems of a modern life in the big city, and often present surreal elements. The show is full of "modern life" elements, such as diets, vegetarianism, racism, and environmentalism. The name of the show comes from the fact that Bunny, the main character, never says any word at all, expressing itself completely by facial expressions and other forms of body language. A single gender for Bunny is not completely defined, since it seems to portray both gender roles in different episodes. However, in the episode "Eating With Manners", Bunny is consistently called "Mr. Bunny", therefore it can be assumed that Bunny is a male. Other recurring characters include: ⁕Squirrel: An orange Squirrel, who frequently pays visits to Bunny, and lives in the wild, but still with all the affordable modern comforts. He is sometimes accompanied with his son and daughter.

Shows for Fans of Untalkative Bunny