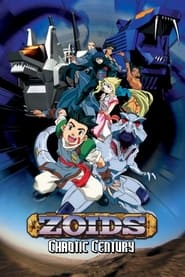 Van discovers a Zoid Organoid in an abandoned laboratory while running from two strangers piloting Zoids. Also in the laboratory, in an animated suspension tube is a strange girl. He breaks the tube open and takes her and the Organoid with him. The girl, who says her name is Fiona, wants to find something called "Zoids Eve", and so Van, the Organoid Zeke, and Fiona begin their adventure.