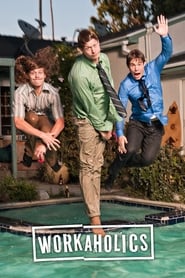 The misadventures of three recent college dropouts, roommates, and co-workers at a telemarketing company and their drug dealer.

Shows for Fans of Workaholics