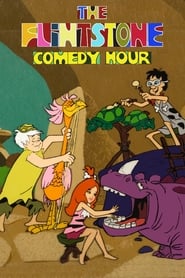 The Flintstone Comedy Hour is a one-hour Saturday morning cartoon anthology series produced by Hanna-Barbera Productions. The program originally aired on CBS as an hour-long show from September 9, 1972 to September 1, 1973 on CBS. The show's first half-hour included new segments featuring Fred & Barney, short gags, vignettes by the cast of Pebbles and Bamm-Bamm and songs performed by the new Pebbles and Bamm-Bamm band called "The Bedrock Rockers" followed by four new episodes and reruns of The Pebbles and Bamm-Bamm Show in the second half-hour. The show also featured bad-luck Schleprock, Moonrock, Penny, Wiggy and the Bronto Bunch from The Pebbles and Bamm Bamm Show. Mickey Stevens replaced Sally Struthers as the voice of Pebbles in four new episodes of The Pebbles and Bamm-Bamm Show and in brief in-between segments, Struthers at the time being fully committed to her role as Gloria Stivic on All in the Family. And this was the final spin-off to feature Alan Reed as the voice of Fred Flintstone because he died in 1977 four months before Fred Flintstone and Friends began to air on October 3, 1977 and he was replaced by Henry Corden who would voice Fred until his own death in 2005.

Shows for Fans of The Flintstone Comedy Hour