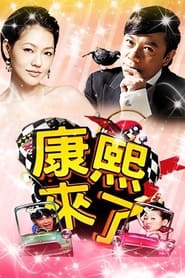 KangXi Lai Le is a Taiwanese variety-comedy talk show hosted by variety show veterans Dee Hsu and Kevin Tsai. It was produced by Chungta Production from 2004 to 2009, and currently produced by Gold Star Production along with the writing and production staff of GUESS. It was first broadcast on 5 January 2004 and currently airs Monday to Friday at 22:00-23:00 on cable TV CTi Variety. In most episodes, the hosts interview a panel of celebrities in various and controversial topics while employing their signature comedic bantering. It is broadcast in Hong Kong on ATV Home under the name of Variety Show of Mr Con and Ms Csi. Although it is broadcast in Taiwan, the show is very successful and popular among Chinese speaking audiences across the world who watch uploaded re-runs over the internet or through bootleg DVDs. The show has been mentioned in other Taiwanese variety and talk shows, mainly from presenters who appeared on the show.

Shows for Fans of Kangsi Coming