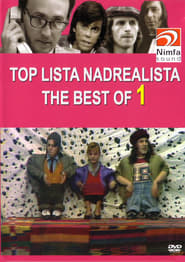 Top lista nadrealista also known as Nadrealisti was a sketch comedy and variety television show airing on TV Sarajevo in three separate installments from 1984 until 1991. It originated from a 15-minute radio comedy segment, broadcast as part of the Primus programme on Radio Sarajevo's channel two during early 1980s. After establishing a core radio audience locally in the city of Sarajevo, Top lista nadrealista got spun off into a television sketch series. Two more series of shows on television followed, making household names of its protagonists all over SFR Yugoslavia and helping launch successful television, film, and music careers for some of them. 'Top lista nadrealista' started in 1979 as a segment on Boro Kontić's weekly programme called Primus on Radio Sarajevo. Conceptualized by the programme's host Kontić as a radio showcase opportunity for young talents in the area of media communications, the segment went through a number of youths in its first two years before the 1981 arrival of a teenage group of friends from the Sarajevo's Koševo neighbourhood who were already involved with various forms of artistic expression. With the arrival of the Koševo kids, led by Nele Karajlić and Zenit Đozić, the segment assumed a more comedic tone, quickly achieving wider popularity and expanding its listenership around the city. By 1984, the radio segment got made into a TV sketch series on TV Sarajevo.