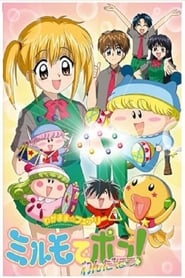 Mirmo de Pon! is a manga series written by Hiromu Shinozuka and serialized in Ciao magazine from 2001 Jul through 2005 Dec. It was also published in twelve collected volumes by Shogakukan. The manga series was awarded the 2003 Kodansha Manga Award and the 2004 Shogakukan Manga Award for children's manga. The series was licensed for an English language release in North America by Viz Media. Four months later, the show aired in Japan for the first time. An anime series named Wagamama Fairy: Mirumo de Pon! by Studio Hibari was adapted from the manga. It premiered in Japan on TV Tokyo on April 6, 2002, and ran for 172 episodes until September 27, 2005. The anime series is also licensed by Viz Media for an English language release in North America, and by ShoPro Entertainment, as Mirmo!.