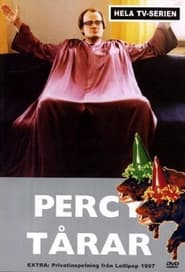 Percy Tårar was a Swedish 6-part television show broadcast by SVT in 1996. It was Killinggänget's follow-up to the popular Nilecity 105,6. It was directed by Walter Söderlund and produced by Magdalena Jangard. The loose plot of the series revolves around a number of mostly unrelated storylines which are told in segments in each episode. These segments are flanked by various stand-alone sketches that will sometimes elaborate on minor characters.

Shows for Fans of Percy tårar