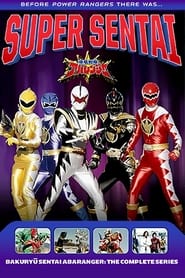 The meteorite believed to have once killed off the dinosaurs actually rattled the Earth into two parallel universes — Another Earth and Dino Earth, where dinosaurs continued to thrive. Now they have evolved into the Saurians, a race of humanoid dinosaurs, and the Bakuryu , a race of mechanized dinosaurs. But the wall between our universes has been breached. The Evolians that have been at war with the Saurians and Bakuryu have invaded, and it's up to the Abarangers to protect the world!