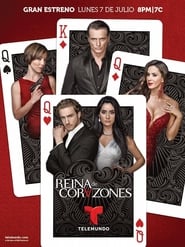 Reina Ortiz will suffer an accident that will cause her to forget the last eight years of her life, in which she became the wife of tycoon Victor de Rosas, Clara's mother and the owner of the most famous bridal atelier in Las Vegas. She doesn’t even remember the happiest moment of her life; when she fell in love with Nicolas Nuñez. Now Reina, who feels she doesn’t belong to this world of luxury and power, will strive to discover her own truth. Meanwhile, Nicolas is working for the secret service under a new identity as Javier Bolivar, is seeking revenge after Estefania Perez made him believe Reina and Victor were responsible for his unjust imprisonment. Entangled in secrets, tricks and deceptions in a double life of gamble under the framework of gold and precious stones trafficking, Nicolas and Reina will fight for the only thing they cannot leave to chance, their love.

Best Episodes of Queen of Hearts

Worst Episodes of Queen of Hearts

Shows for Fans of Queen of Hearts