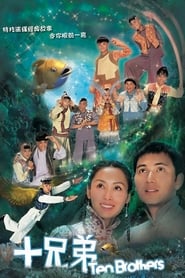 Loosely based on the Chinese mythology of the same name, the TV drama tells of a young couple whose lives change when the woman accidentally drinks the soup of ten magical beans. From the ten beans, the woman conceives ten sons. Fearful and unprepared for their sons growing into adults, the couple abandons them. One day, a mysterious white-haired man appears in one of the brother's visions and delivers a prophecy that could change the ten brothers forever.

Shows for Fans of Ten Brothers