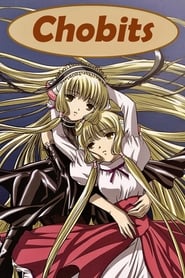 Tokyo is abuzz with persocoms – humanoid computers that are virtually perfect. The socially and technologically inept Hideki is dying to get his hands on one. When he finds Chii abandoned in the trash, she’s cuter than any current model he’s ever seen before. But when he gets her home and turns her on, she has no data and only a single learning program installed. While Hideki puts his whole heart into teaching Chii the ins and outs of humanity, a mystery unfolds as a dark secret within her awakens.

Shows for Fans of Chobits