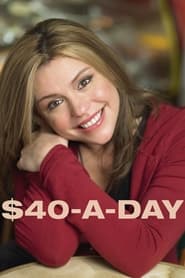 $40 a Day is a Food Network show hosted by Rachael Ray. In each episode, Rachael takes a one-day trip to an American, Canadian, or European city with only US$40 to spend on food. While touring the city, she finds restaurants to go to, and usually manages to fit three meals and some sort of snack or after-dinner drink into her small budget. The show premiered on April 1, 2002, some five months after the debut of 30 Minute Meals, making it her second Food Network show. Production is currently on hiatus. Clips are sometimes used in Ray's later series, Rachael Ray's Tasty Travels. Another Food Network series, Giada's Weekend Getaways starring Giada De Laurentiis, is similar in format. The show is currently being rerun on The Travel Channel.

Worst Episodes of $40 a Day