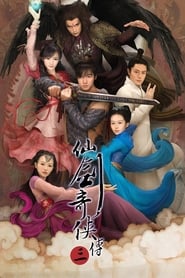 Chinese Paladin 3 is a Chinese television series adapted from the video game of the same title, and, because of an added time travel concept allowing the main protagonist from Chinese Paladin to appear in the setting decades before the events of the first, serves as an interquel to both. It was first released on television stations in mainland China, Taiwan, Malaysia and Singapore in 2009. Chinese Paladin 2 was not filmed because the producers felt that the third game had a much stronger story than the second.

Shows for Fans of Chinese Paladin 3