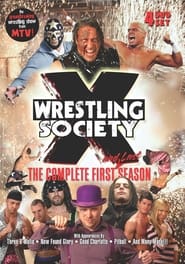 Wrestling Society X was a short-lived professional wrestling-based television series produced in 2006 by Big Vision Entertainment. The weekly television series formerly aired on MTV, MTV2, MTV Tr3s, and over a dozen other MTV outlets throughout the world. WSXtra, an extra program featuring WSX matches and interviews not broadcast on television, was available on the promotion's MTV website and Video on Demand. WSX was presented as a secret society of wrestling that used a venue referred to as the WSX Bunker, complete with an artificially worn-out looking ring for its matchups. In matches held within this venue, falls count anywhere was the stipulation. The program also stood out due to its unorthodox approach to pro wrestling; this included frequent use of highly expressive plants, crowd sound effects, electrical sound effects, visual effects, and camera shaking when a wrestler would fall prey to electrical weapons. Along with wrestling, WSX featured musical guests playing at the start of each television broadcast, with some band members joining the broadcast team after the performance.