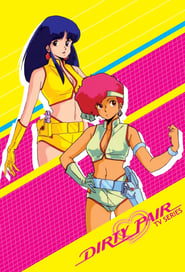 Dirty Pair is a series of sci-fi comedy light novels written by Haruka Takachiho and illustrated by Yoshikazu Yasuhiko that was later adapted into anime and manga versions. The stories take place in the years 2138-43, by which time humanity has spread across some few thousand star systems. A corporation called the World Welfare Works Association helps member systems of the United Galactica federation deal with various planetary-scale problems, for profit, by sending agents called "trouble consultants". Probably the most high-profile arm of the organization is the Criminal Investigations section, which works to solve crimes or mysteries. The series focuses on a team of trouble consultants in that section, named Kei and Yuri, who have a reputation for leaving a trail of destruction behind them, for which they are known publicly as the "Dirty Pair". The franchise has bounced across multiple formats and production companies, resulting in eight novels and a few shorter stories, a television series, two OVA series, two OVA features, a feature film, a number of graphic novels, and two short Japanese radio series. The series won the Animage Anime Grand Prix prize in 1985.

Shows for Fans of Dirty Pair