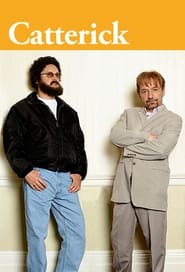 Catterick, aka Vic and Bob in Catterick, is a surreal 2004 BBC situation comedy in 6 episodes, written by and starring Vic Reeves and Bob Mortimer, with Reece Shearsmith, Matt Lucas, Morwenna Banks, Tim Healy, Mark Benton and Charlie Higson. The series was originally broadcast on BBC Three and later rerun on BBC2. Reeves has said that the BBC do not want another series of Catterick, though he may produce a spin-off centring on the DI Fowler character. Catterick is arguably Vic and Bob's darkest and most bizarre programme to date, balancing their typically odd, idiosyncratic comedy with some genuinely dark scenes. It plays like a darkly comic road movie, albeit full of Vic and Bob's bizarre, often inscrutable and frequently silly humour. Catterick is probably Vic and Bob's most uncompromising show since their notorious and frequently baffling 1999 sketch series Bang Bang, It's Reeves and Mortimer, from which most of the characters are taken. It is in some ways stylistically similar to their short film The Weekenders first broadcast in 1992 on British television as part of Channel 4's "Bunch of Five" series. The series is named after Catterick in North Yorkshire, Britain's largest army base. It is about 10 miles away from Darlington where Vic Reeves grew up. It is also about 20 miles away from Middlesbrough where Bob Mortimer grew up.

Shows for Fans of Catterick