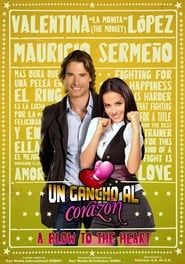 Un gancho al corazón is a Mexican telenovela that began airing on Mexico's Canal de las Estrellas, beginning August 25, 2008. It began airing in the United States on Univision on June 22, 2009, with the show's run ending there on May 3, 2010. The telenovela is a production of Angelli Nesma Medina and is an original story by Adrian Suar starring Danna Garcia, Sebastián Rulli, and Laisha Wilkins. The telenovela is a remake of Argentine daily comedy Sos mi vida.