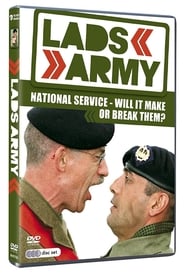 Lads' Army was a British reality TV programme, specifically of the kind that constitutes a historically derived social experiment – other examples being The 1900 House and The Frontier House. Shown on ITV, Bad Lads Army is based on the premise of subjecting today's delinquent young men to the conditions of conscripts to British Army National Service of the 1950s to see if this could rehabilitate them. The programme was derived from an earlier one called simply Lads Army in which a number of volunteers underwent four weeks of basic training for 1950s National Service. Unlike the three sequel series, the original programme's experiment was merely to see if members of the modern British public could cope with the 1950s training, and how they compared to the public of that period. The success of the original series led to the experiment being repeated with the recruits being petty criminals, often given the option to undergo the training by courts as an alternative to serving pending sentences, to explore the proposition that it would be beneficial to reinstate National Service for petty criminals and delinquents as an alternative to more conventional sentences.

Shows for Fans of Lads' Army