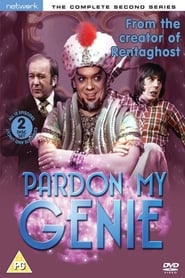 Pardon My Genie was a children's comedy series produced by British ITV contractor Thames Television, and written by Bob Block who later created Rentaghost. The premise was that a magic genie appeared in present-day Britain, summoned by a young apprentice named Hal Adden, a pun that goes some way towards characterising the series. Various comical misunderstandings arise, primarily aimed at youngsters. Arthur White replaced Paddick for the second run of thirteen episodes. Throughout both series, Hal was played by Ellis Jones, with Roy Barraclough as his long-suffering boss, Mr Cobbledick. The first series of 13 episodes was released on DVD on 22 September 2009. The second series of 13 episodes was released on 1 July 2013.

Best Episodes of Pardon My Genie

Worst Episodes of Pardon My Genie