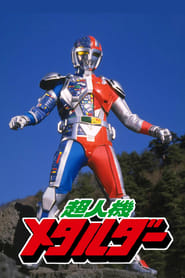 Choujinki Metalder is the sixth and shortest entry of the Metal Hero Series, running from March 16, 1987, to January 17, 1988, for only 39 episodes. It was the first series to air on Sundays instead of Mondays. Metalder bears many similarities to Toei's earlier program Android Kikaider, particularly in its themes, characters, and the hero's costume design. The action footage of Metalder was adaptated for the first two seasons of VR Troopers. On February 21, 2007, Toei released the complete Metalder TV series and film on a seven-disc DVD set. For distribution purposes, Toei refers to this television series as Metalder.