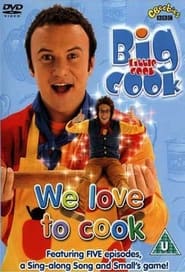 Big Cook, Little Cook is a t.v. series for nursery school-aged children broadcast on BBC television channels. The programme is set in the kitchen of a café, with two main characters, Big Cook Ben and Little Cook Small. Ben is a full-sized adult, but Small is only a few inches tall and flies on a wooden spoon. The format of a programme generally includes a visit to the café by a nursery rhyme or fairy tale character. Little Cook tells a story about the visitor in which he’s the real hero, and then they decide to cook the visitor a meal from Big Cook's recipe book. Little Cook will then fly away on his magic spoon to see where one of the ingredients is made. Activities within the kitchen, such as washing up and tidying up, are accompanied by catchy song and dance routines. Both cooks act in a way to encourage children to take an interest in cooking. Big Cook does most of the cooking and tells the viewers how to make the recipes; Little Cook does some preparation or sets the timer.