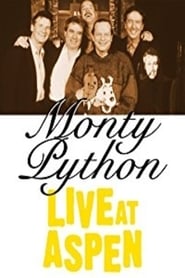 Monty Python Live at Aspen was a reunion show featuring the five surviving members of Monty Python: John Cleese, Terry Gilliam, Eric Idle, Terry Jones, and Michael Palin. Graham Chapman was also allegedly in attendance as his "ashes" were brought out in an urn. The Pythons looked back at their work and received an American Film Industry award. It also featured some memorable moments when Gilliam 'accidentally' kicked over the urn, which Eric Idle said was their biggest audience laugh ever. It was hosted by Robert Klein and featured a cameo by Eddie Izzard. The show was released on DVD by A&E Home Entertainment as part of the Monty Python Live compilation.