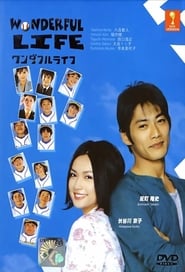 Wonderful Life is a Japanese drama series aired in Japan on Fuji TV in 2004. It stars Takashi Sorimachi, Kyoko Hasegawa, Norito Yashima, and Ken Horiuchi. Kirishima, played by Takashi Sorimachi, is the most famous baseball player in Japan. He is forced to retire early due to injuries. His family abandons him and he decides to spend his time coaching at a local young boys baseball team. The team is verging disbandment because they had not won one single game. Takashi plays the popular baseball player who gives kids the hope that "dreams come true", but in reality he is arrogant and a selfish flirt who spends his money pointlessly. Mizuki, played by Kyoko Hasegawa, wants to become a lawyer. Her brother plays on Kirishima's baseball team, but she can't stand Kirishima.