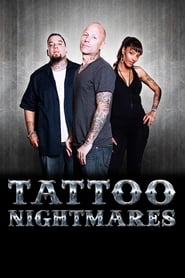 Tattoo Nightmares is an American docu-reality series taking a closer look at “tattastrophies” and the genius work of cover-up artists who fix them. Tommy Helm, Big Gus and Jasmine Rodriguez are among the most revered cover-up artists in the business, and they employ their years of experience to undo their client’s ill-conceived tats. Watch as they work their magic and turn “disasterpieces” into new works of art.

Shows for Fans of Tattoo Nightmares