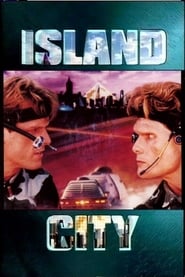 Island City is a science fiction television pilot movie that was aired by Prime Time Entertainment Network in 1994. The film was produced by Lee Rich Productions in association with Lorimar Television. In the future, humanity develops a "fountain of youth" drug, but as many people around the world begin to take it, most begin to mutate into a barbaric proto-humanoid state. The few people immune to this side-effect of the drug band together and live in a futuristic city while the mutants live in the vast wasteland outside its gates. In an effort to save the human race and understand what went wrong, the city sends out research missions in fortified vehicles to bring back mutated humans for research, and the film focuses specifically on one such squad of soldiers and scientists. During one of their missions into the wasteland, the team comes under attack and one of their own is captured by the mutants. The rest of the movie, which was meant to serve as an introductory episode of the series, deals with the main characters coping with the loss of their friend and organizing a search-and-rescue mission, while secondary characters allow the viewer to explore the various facets of life in their city.