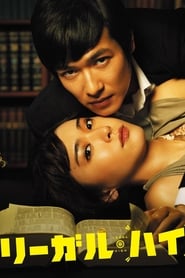 A lawyer with a big personality works with an straightlaced recent law graduate on various law cases in Japan.

Shows for Fans of Legal High