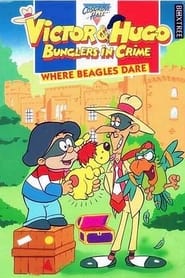 Victor and Hugo, Bunglers in Crime is an animated series made by Cosgrove Hall for Thames Television and screened on CITV from 6 September 1991 to 29 December 1992 and is a spin off from Count Duckula. The series centres on the exploits of two bumbling French criminals - the eponymous brothers of the title. Despite referencing the French author Victor Hugo in their names, neither brother was particularly intelligent. The plot of each episode dealt with Victor and Hugo and their English-based business "Naughtiness International" being hired by crime figures to steal something. Victor would come up with a "meticulous plan" to achieve this goal, which was routinely botched by Hugo. The episodes would traditionally end with the brothers imprisoned.