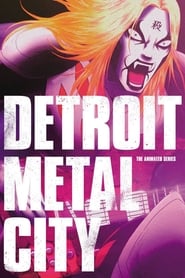 Dominating the world of indie music, Detroit Metal City (DMC) is a popular death metal band known for its captivatingly dark and crude style. Its extravagant lead singer, Johannes Krauser II, is especially infamous as a demonic being who has risen from the fiery pits of hell itself in order to bring the world to its knees and lord over all mortals—or at least that's what he's publicized to be. Unbeknownst to his many worshippers, Krauser II is just the alter ego of an average college graduate named Souichi Negishi. Although he is soft-spoken, peace-loving, and would rather listen to Swedish pop all day, he must participate in DMC's garish concerts in order to make ends meet. Detroit Metal City chronicles Negishi's hilarious misadventures as he attempts to juggle his hectic band life, a seemingly budding romance, and dealing with his incredibly obsessive and dedicated fans.