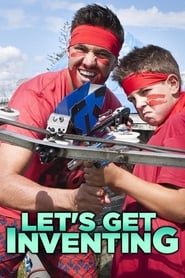 Let's Get Inventin' is a New Zealand reality television series that takes young inventors and helps them to create inventions. If successful they go into a prize pool, as well as having a chance to have their idea patented. In 2007, the series won the Qantas Award for best children's/youth programme. In Let's Get Inventin' 24 Kiwi kids with ideas get together with some of the greatest inventors in the country to bring their inventions to life. Rocket-powered ice skates, a six legged walking car and a jet-powered hover skateboard are some of the inventions. And at the end of the series, the New Zealand public chooses their favourite invention which wins its own official patent prize package totalling $10,000;a trip to the UK; and a ride in the Aquada. Presented by Clinton Randell, this show matches up young inventors with experienced designers, and high profile celebrities as mentors. The show was previously presented by Geoff Bell, who then moved on to co-host Sticky TV.

Best Episodes of Let's Get Inventin'

Worst Episodes of Let's Get Inventin'