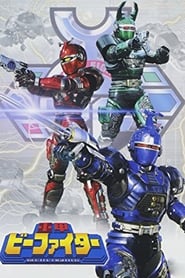 Juukou B-Fighter, was a 1995 Japanese tokusatsu television series. B-Fighter is short for "Beetle Fighter". It was part of Toei's ongoing Metal Hero Series. It dealt with three members of the prestigious Earth Academia fighting against the evil forces of the otherworldly Jamahl Empire. The action footage and props were used for Big Bad Beetleborgs.