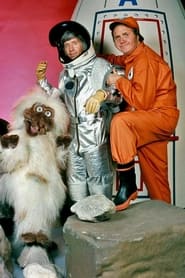 Far Out Space Nuts is a Sid and Marty Krofft children's television series that aired in 1975 for one season, and produced 15 episodes. It was one of only two Krofft series produced exclusively for CBS. Like most children's television shows of the era, Far Out Space Nuts contained a laugh track. Like most of the Kroffts' productions, the show's opening sequence provides the setup of its fanciful premise: While loading food into various compartments to prepare a rocket for an upcoming mission, Barney instructs Junior to hit the "lunch" button, but Junior mistakenly hits the "launch" button. The rocket blasts off and takes them on various misadventures on alien planets. The show starred Bob Denver as Junior, a seemingly dim-witted but uniquely clever maintenance worker employed by NASA, and Chuck McCann as Barney, his grumpy, short-tempered co-worker. Patty Maloney played Honk, their furry friend who made horn sounds instead of speaking.

Shows for Fans of Far Out Space Nuts