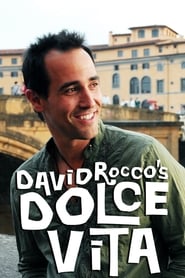 David Rocco's Dolce Vita is a television show hosted by David Rocco. The show is shot on location in and around the cities and countrysides of Italy, following the cultural, social, and culinary escapades of David and his friends. Besides cooking, the show explores the Italian ways of life and ways of food in this culture exposé. David and his wife Nina traipse around Florence and Sicily, cooking dinner for friends, checking out local hot spots, and living the sweet life. The recipes that David makes are generally easy to follow, classic Italian dishes. The whole concept behind the cooking aspect of the program is that good cooking doesn't have to be difficult. The dishes he makes are always elegant and impressive, but simple and quick. Some episodes deal with thematic recipes, such as "The Hunt for Funghi". Other episodes include "The Party", "Boy's Night Out", and "Rocco and the City".