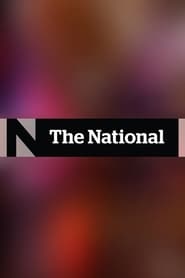 CBC News The National is CBC Television's flagship national television newscast, broadcast from the Canadian Broadcasting Centre in Toronto. It reports on major Canadian and international news stories, airing on CBC Television weeknights and Sundays at 10:00 p.m. local time. On Saturdays, a 30-minute edition generally airs at 6:00 p.m. ET during the season of Hockey Night in Canada, and 6:00 local otherwise, except on certain stations carrying local newscasts in that timeslot instead. Since September of 2007, The National has aired in HDTV, the first Canadian national newscast to do so. The program is also aired on CBC News Network; on weekdays, the initial version that airs live to Atlantic Canada on the main network is simulcast on CBC News Network at 9:00 p.m., with several repeat broadcasts overnight. Until August 2005, The National was also seen in the United States on the defunct Newsworld International channel; the program continues to air occasionally on C-SPAN when that network wants to provide coverage of a major Canadian news story, or a Canadian angle for a world or American event.

Best Episodes of The National

Worst Episodes of The National