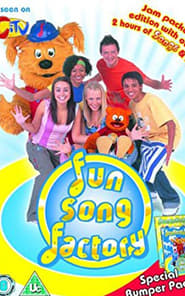 Fun Song Factory is a British preschool children's show on CITV aimed at youngsters. It was one of the first songs-based shows to be filmed in front of a live audience of children, and is similar to Australian shows such as 'The Wiggles' and 'Hi-5'. It was originally created in 1994 by Will Brenton and Iain Lauchlan, who later went on to create and produce The Tweenies, Boo!, BB3B, and Jim Jam and Sunny. The first production was a sell through video filmed at the Polka Theatre in Wimbledon, presented by Iain Lauchlan, Sarah Davison and Dave Benson Phillips. The video was a great success, and led to a second being filmed at Chicken Shed in North London, this time presented by Iain, Dave and Michele Durler. All in all seven videos were shot, selling 750,000 copies in the UK before the series was commissioned by GMTV in 1998. The TV show was originally presented by Justin Fletcher, Katy Stephens, Karl Woolley, Alex Lovell and Dave Benson Phillips. This show was nominated for a BAFTA in 1998. The show worked well until in 2004 CITV commissioned an updated version of the show with different characters.