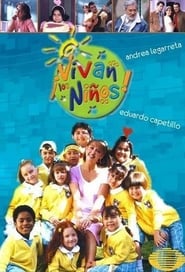 ¡Vivan los niños! is a Mexican telenovela for children that premiered in 2002. It ran for 155 episodes and finished in 2003. The opening, Vivan los niños, was recorded by the Latin pop group OV7. One of its closing themes, also entitled Vivan los niños, was performed by Cuban-American singer and songwriter Ana Cristina. The show is a version of the Argentinian telenovela "Jacinta Pichimahuida, la maestra que no se olvida". The series starred Andrea Legarreta as 2nd grade teacher Lupita Gómez. After the series ended, Andrea became the long-time host of the morning talk show Hoy. On July 12, 2012, in celebration of Andrea's birthday, the producers of Hoy reunited her with the young actors who played her students on the series.