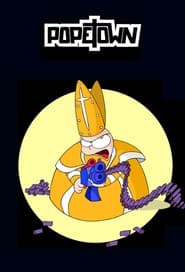 Popetown is a controversial animated sitcom, billed by its producers as "Father Ted meets South Park", following the doodles and scribblings of a student at school during a lesson. His drawings depict the life of Father Nicholas, who lives in a Vatican City parody referred to as "Popetown". He is charged with being the handler for the Pope who is a complete nincompoop with the emotional and mental maturity of a four-year-old. Father Nicholas must keep the Pope out of trouble, and make sure the general public does not find out that the Holy Father is a drooling idiot. Other characters include a priest who is a sexual deviant, and a trio of corrupt cardinals who secretly run Popetown and attempt to get rich behind the Pope's back. These and other elements caused the show to be extremely controversial.

Shows for Fans of Popetown