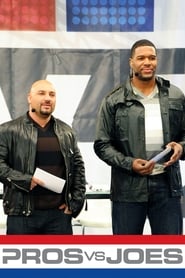 Pros vs. Joes is an American physical reality game show that airs on Spike TV. The show features male amateur contestants matching themselves against professional athletes in a series of athletic feats related to the expertise sport of the Pro they are facing. For its first three seasons, the show was hosted by Petros Papadakis. Since Season Four, it has been co-hosted by Michael Strahan and Jay Glazer. The first two seasons were filmed at Carson, California's Home Depot Center, which was referenced in aerial shots.

Best Episodes of Pros vs. Joes

Worst Episodes of Pros vs. Joes

Shows for Fans of Pros vs. Joes