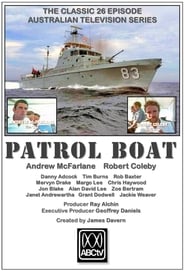 Patrol Boat is an Australian television drama series that screened on the Australian Broadcasting Corporation. Patrol Boat was created by James Davern and two series were produced, in 1979 and 1983, with a total of 26 episodes. Patrol Boat was about the activities of the crew of a Royal Australian Navy patrol boat which patrolled Australia's coastline. The series was produced with the co-operation of the Royal Australian Navy. Two fictional RAN patrol boats were depicted in the series. Attack class patrol boat HMAS Ambush was used in the first season, with filming taking place during 1978 and 1979 around Sydney Harbour, Pittwater, Ku-ring-gai Chase, and the Hawkesbury River. For the second season, the crew transferred to the newer Fremantle class patrol boat HMAS Defiance. The series is similar to the BBC series Warship, screened by the Australian Broadcasting Corporation from 1976, before Patrol Boat. Although the 2007 drama Sea Patrol is based on the same subject, it is not intended to be a follow on to Patrol Boat.