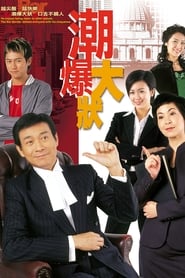 The series revolves around a fictional Hong Kong senior counsel named Tony Cheung. Senior Counsel Cheung is well known for winning 31 legal cases in a row but is also notorious in legal circles for his unsavoury (but ethical) tactics. His focus on his legal career has also alienated family members and anyone romantically involved. When his colleague gets involved with an unscrupulous businessman, he begins to rediscover the lost idealism and righteousness of his youth.

Shows for Fans of Bar Bender