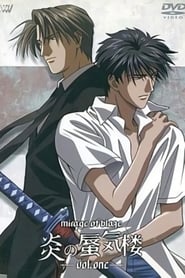 Mirage of Blaze is a shōnen-ai light novel series by Mizuna Kuwabara, which are published under Shueisha's Cobalt label. It was adapted into an anime TV series directed by Susumu Kudo in 2002 and an OVA in 2004. Difficult to classify, Mirage of Blaze is equal parts melodrama, historical romance, and supernatural fantasy. Japanese history predominates a heavily structured plot, which mainly involves the continued aggression between magic using guardians, or "possessors," and the denizens of a "feudal underworld," or the restless souls of long-dead samurai attempting to re-ignite ancient war on the modern plane. The anime TV series and the OVAs have since been released in North America by Media Blasters, and both have aired on Encore Action and Encore WAM.

Best Episodes of Mirage of Blaze

Worst Episodes of Mirage of Blaze

Shows for Fans of Mirage of Blaze