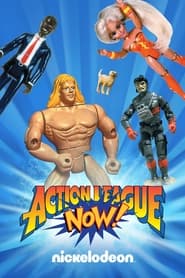 Action League Now! is a stop motion children's television series that was originally part of All That and then KaBlam! on Nickelodeon, and was later spun off into its own short-lived show. It was made using "chuckimation". The series follows the adventures of a superhero league, composed of various action figures, toys, and dolls. The show was created by Tim Hill. Most episodes took place in a house of an unseen resident. Many of the characters were voiced by radio personalities from Pittsburgh.